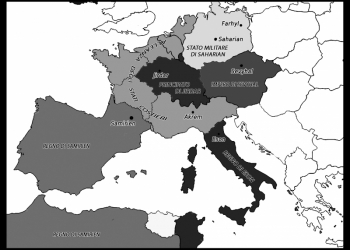 Service’s Code is set in two different worlds: ours, just as we know it, and a parallel one.
The two worlds are almost completely identical if you take into consideration the position of the continents and their climates. Things are quite different when we focus on the populations and all aspects with which these populations have influenced the world: politics, technical innovations, history and religions.
This setting is funded on the the belief that all the planets in the universe are naturally endowed with some perennial energy. These vital forces give people the possibility to give life through an inanimate element (as in the case of land and water), or modify the natural state of an object (as with fire). In living beings this energy becomes even more blatant.
Thanks to these inner forces, which from here on we will call Basic Energies, animals, plants and humans are endowed with life itself.

All the worlds are imbued with these energies, and one of these two worlds, that from here on we will call the Second Dimension, has tried to dominate these energies since the dawn of time.
For this purpose, the Second Dimension is equipped with an object capable of interacting between living beings and Basic Energies, allowing communication. The Second Dimension, the only world that knows what it is and how to use it, calls this tool Iantor. This world, or dimension, remembers our medieval period but there are some important differences that make it purely a fantasy world. Living beings that inhabit it are not just humans, there are elves and chimeras too, and it is a world where everyone can entrust their daily work and their own comforts to spells rather than machines or physical force. It is because of magic, that technology and many sciences have not been studied and developed.
After thousands of years of use and abuse of Basic Energies, the Second Dimension has “ran them down” at such a slow and insignificant pace that the population didn’t realize what was happening in time. Until, in 1983, for unknown reasons this world collided with one of its twin worlds: ours.
The Second Dimension became aware of this impact, not because there was a crash between the two of them, but because there was an energetic collision. Two events made this impact clear: the first was that the energies summed up by the Iantor grew enormously in the Akrem region, the area closest to the clash. The second one was that, in the area around the city which was first just demarcated and then banned, while casting any kind of spell, people were literally thrown into the new dimension. A very similar and yet very different world.
The new world was then renamed the Third Dimension, since in most religions the First Dimension has been identified for centuries with the place where magic is stored, a kind of limbo where the God who had created everything resides. This new world is, from the Second Dimension point of view, a place developed in a diametrically opposite way. A world that has never used its Basic Energies, but that has developed technologies to gain comforts that in the Second Dimension were obtained with the simple use of magic.
Being a virgin world with regards to the use of Basic Energies, and coming into the Iantor field of action, these new energies increased exponentially. At first the dimensional jumps, which did not harm the ones crossing to the other world, were accidental and occasional, but after a short time these were able to move hundreds of beings at a time, and most of them were returning from the new dimension with alien objects which were often dangerous.
Shortly after, the Coast States formed an alliance to take advantage of this interdimensional connection, bringing the matter to the attention of the Joint Chief of Staff Council that realized the threat posed by such events, and their need to take advantage of this new magical source acquired through this dimensional collision. Hence, a special section of the army was formed to regulate these dimensional jumps and to protect the Second Dimension from eventual attacks coming from the inhabitants of the newly discovered world. It was also established that it was vital to keep their own existence hidden from these new alien neighbors to protect themselves, at least until the military resources of the possible enemy were well-known. Soon this special section expanded turning into the strongest military power in the world, known as the Intra Dimensional Shield Confederation, also called Confederation or Shield: the central bureau for the world defense.
I.D.S.C. headquarters in the Second Dimension are in the town of Akrem, while in the Third Dimension they were set in the town of Busto Arsizio, exactly in the center of the area where the two worlds collided. Only special chosen agents can enroll in the I.D.S.C..
To date, Shield takes care of internal defense; newly discovered world magic resource exploitation, without the knowledge of its inhabitants who, after all, do not have any use for it; retrieval of eventual refugees trying to illegally move to the new dimension; and the strict regimentation of alien objects brought to the Second Dimension.
Recently the Iantor was stolen and brought to the Third Dimension. The Second Dimension was thus left without this tool’s decoding properties, leaving the whole world devoid of any communication with its Basic Energies. Since the Iantor is now in the Third Dimension, the so-called “hot zone” in which the two worlds collided is still “covered” by its properties, but the rest of the world is now obscured and therefore deprived of any kind of magic.
For this reason, Shield started the recovery project classified with the Service Code number 156459 with the purpose to bring the Iantor back to its original dimension.

Questo sito utilizza cookie per analizzare l’andamento delle visite, per migliorare la navigazione e per il collegamento con i social. Chiudendo questo banner, scorrendo la pagina o continuando la navigazioni, esprimi il tuo consenso all'uso dei Cookie in questo sito. <br> ENGLISH _ This site uses cookies to analyse website traffic, improve navigation, and connect you to your social channels. By closing this banner, scrolling down the page or clicking anything on it, you agree to the use of the cookies on this website. <br> maggiori informazioni // more information