The urban fantasy light Novel that head butts even the most excessive American action movie.

A mixture between a novel and a manga…

The only sure thing about it is that this is not a serious story. 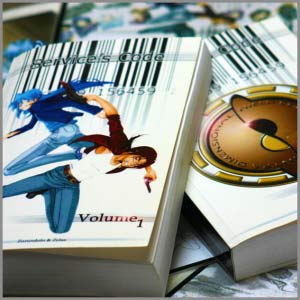 Service’s Code is a urban fantasy light Novel.
Service’s Code is a webcomic style manga.
Service’s Code is also a setting manual for role-playing games and even upholstery wall stickers..
Service’s Code was conceived on October 1st 2008, the same day the story begins and the same day it starts being serially published online.
It is an installment urban fantasy novel, co-written by Zelas and Zurundolo and illustrated by Zurundolo.
At first, the story was only published online, then around the end of 2012, when the first series was coming to an end, some fans asked the authors to have it printed on paper.
Hence the project expanded. The twitter account and the facebook page were created, the homonym domain was purchased and the first paper printed books saw the light at the Fantasy Book Fair in Pandino in 2013.
Shortly after, Service’s Code expanded again, becoming a manual setting for role-playing games, published by Inkhazard cultural association for their S.A.G.A. basic rule manual.
At the same time a famous DIY shop chain starts selling Service’s Code upholstery wall stickers.
In 2013 Service’s Code hit Lucca Comics & Games. In 2014 Zurundolo starts working on the manga book based on the series and, this too, is serially published online and first printed and presented in May 2015 at the Milan anime Expo.
Today Service’s Code is still growing, both in its first series, and with the Work In Progress second series called “Fragments.” 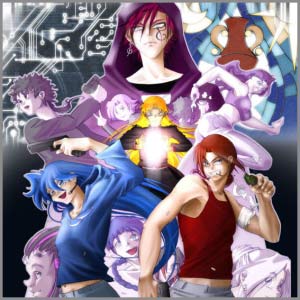 Service’s code is a fantasy series that knocks out even the most excessive American action movie; with its right mix of drama and hilarity, it’s a pleasantly readable story, and we hope you’ll like it at least half as much as we do.

Begun in 2008, Service’s Code talks about two worlds: our planet and its twin.
About a Confederation that protects our planet from the truth.
About a few convicts who fight to regain their freedom.

It’s about two twins and their difficult way to deal with each other.
It’s about a young man who made the biggest mistake of his life without even knowing it.

It’s a story of explosions, fights, shootings, of magic and spells, of preternatural powers and murders, of mental illnesses and psychic powers. And everything’s narrated with irony and a good amount of bad words amidst scenes of ordinary madness.

The light novel and the webcomics will be updated randomly

The authors of Service’s Code

Now online six new pages of the second volume of the manga!! Comments are very welcomed! 🙂

Now online three new pages of the second volume of the manga!! Comments are very welcomed! 🙂

If you like Service’s code and are wondering how you can help us, just tell your friends about the site, light novel and webcomic.
That’s really all I need. Traffic.
If you have just tell at you friends about Service’s code or, you don’t because you’re like us and don’t have any friends, you can also vote us on top web comics, if you prefer. That’s super helpful.
Oh, and suggestions in the comments are always welcome…:)

Thank you so much 🙂

For subscribe and Logins use ” + ” in the upper part of this page.

Questo sito utilizza cookie per analizzare l’andamento delle visite, per migliorare la navigazione e per il collegamento con i social. Chiudendo questo banner, scorrendo la pagina o continuando la navigazioni, esprimi il tuo consenso all'uso dei Cookie in questo sito. <br> ENGLISH _ This site uses cookies to analyse website traffic, improve navigation, and connect you to your social channels. By closing this banner, scrolling down the page or clicking anything on it, you agree to the use of the cookies on this website. <br> maggiori informazioni // more information